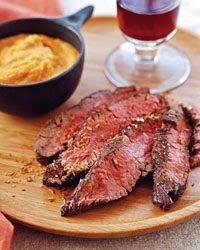 While most people seem to prefer beef tenderloin, I've always liked other cuts that seem to be much more favorable. The problem with these cuts is that they tend to be tough...Nowhere near as tender as fillet Mignon. If you learn to prepare and cook them properly, cuts like flank and hanger steak can be delicious. Three tips to ensure success with these cuts:

1. You must marinade, and the marinade needs an acidic ingredient such as lemon juice or wine.
2. Don't over cook! Rare or medium rare is the only way to go.
3. Slice thinly on the bias to serve.

Mix all of the ingredients. It will be a thick consistency. Put in a zip lock bag, add the hanger steak, remove the air and let marinade a couple of hours or overnight in the fridge.

Broil on high, close to the heat 5 minutes each side. Don't overcook!
Let rest 5 minutes, and thinly slice.
Posted by Dave, The BurghFeeder at 1:04 PM 1 comment: Links to this post 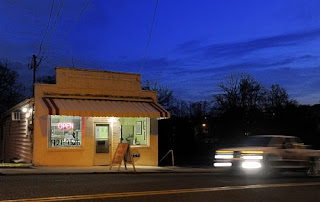 I've never really been a big doughnut fan. Like desserts, most are just a little too sweet for me. In Sunday's Post Gazette was a story about a doughnut shop in the West End called the Better-Maid Doughnut Company. The story is interesting, noting that the owner, Ken Smith, starts work at about 8:30 in the evening and spends all night making, frosting and filling the doughnuts. On weekdays he opens at 6 am, and closes when he runs out of doughnuts, sometimes as early as 8:00.

As a child, my parents had a small cottage on a little lake in northern Pa, and one of the weekend treats was an early morning trip to a little store (I think called Pierces) where the owner would be rolling dough and frying doughnuts. The unusual thing was they were old fashioned cake doughnuts. That's what Ken's making at Better-Maid, and why I was so interested in this place.

Stacy and I showed up at about 8:00am, and when we went inside, there were 4 or 5 people in front of us. No problem, except there weren't any doughnuts! Ken was in the back working and the nice girl at the counter said it would be 10 or 15 minutes. Huh. I'm not one to wait for something like that, but Stacy already had a cup of coffee in hand and was not leaving. I'm glad we didn't! We only got two kinds, glazed and sugar, but they were worth the wait. Crispy on the outside, and soft on the inside. These may be the best doughnuts I've ever had. Just like I remember from the little store at the cottage and I've got to admit, I think Ken does them better!
Posted by Dave, The BurghFeeder at 3:52 PM 3 comments: Links to this post 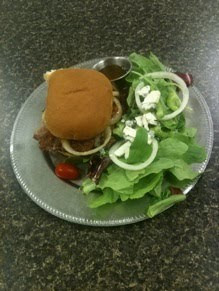 A local TV station, WPXI, just held a contest to name the top Burgers in the Pittsburgh area. The competition is split into two portions, one being a blind taste test with eleven judges, held at the WPXI studios, and the other a peoples choice. The judges chose their top ten favorites. Here are the winners:

I have good reason to have faith in this contest. A couple of months ago, they did the same thing in order to name the best pizza, and the winner was my favorite, Franks in Ambridge. These judges must know what they are doing!

I've had the burgers at City Grill, the Union Grill and of course, Tessaros. I also tried to go to Winghart's, but unfortunately it was Sunday and they were closed. Then one afternoon last week, my friend Tom and I decided to try Someone Else's Bar in Castle Shannon, but again closed. Finally, Stacy and I, hungry for a great burger decided to take a drive north to Burgh'ers.

Burgh'ers is in a new strip mall just north of the Zelienople business district. You enter and go to the counter to order from a chalkboard menu. The burgers are named after areas around Pittsburgh, including the Polish Hill, with fried onion, cheddar cheese and of course a peroigi. The Mexican War has roasted green chile's, cheddar, avocado, tomato and cilantro. All are $8.99 and include your choice of fries or salad. Since both of us ordered salad, I can't comment on the fries but the salads were very good. Fresh spring greens, no iceberg here, and your choice of dressing as long as it's vineratte or ranch.

I ordered the Shadyside Burger which is served with bacon, grilled onions, Swiss cheese, and fresh wild mushrooms. The ingredients were all very fresh, and the meat had a tremendous flavor. Stacy got the Forrest Hills, with blue cheese, fresh wild mushrooms, spring mix, and finished with local honey.

I don't know if this is the best burger around Pittsburgh, but it definitely belongs at the top of the list.

I've driven past this place hundreds of times in the past few years, and for some reason I never had a desire to try it. I just thought it was a typical chain (remember Chi Chi's?), and never stopped. After reading some good comments on different food websites I decided to give it a try.

I admit that I don't have much knowledge about Mexican food, but I do know it when I like it. This is not the type of place that the Azul crowd (in Leetsdale) will flock to, but it sure satisfies my taste for what I know, which is admittedly Americanized/Mexican.,

The interior is covered with bright colored Mexican artwork, with a large dining area and a small bar in the rear. The menu is extensive and very reasonably priced. Service was prompt, and the server offered suggestions and readily answered our questions about the menu. Stacy ordered a bean burrito with a cheese enchilada and Spanish rice. I had a chili rellieno with refried beans, a taco and bean and guacamole salad, each for $6.99. The servings were very generous, more like dinner size, and very good.

Patron Mexican Grill is a great choice for a family, with a nice atmosphere and good prices. I'm sure we will be back.
Posted by Dave, The BurghFeeder at 9:39 AM 2 comments: Links to this post