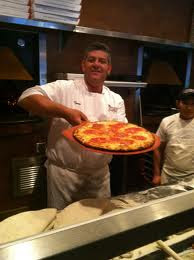 Those of you that read this drivel know that I'm always on the lookout for a unique comfortable tavern, good fish sandwich or exceptional pizza. My favorite pizza's in the area, Franks and Pizza House, are both located Northwest of Pittsburgh, in Ambridge. Harry's in Peters township and Il Pizzaiolo in Mt. Lebanon are also favorites when I'm in the mood for a more traditional style. Anthony's Coal Fired Pizza which recently opened in Settlers Ridge, is going into my list of favorites.


Anthony's got their start in Florida. Hometown son and Miami Dolphins quarterback, Dan Marino soon became a patron. Dan's enthusiasm soon compelled him to become an equity partner in the business, as they started to expand throughout Florida and now in the Northeast.

The pizza is baked in a coal fired 800 degree oven and comes out thin and crispy with just a touch of burnt, similar to the wood fired style. A side salad with fresh mixed greens and full bar service (say hello to Tracy!) made for a great meal. The only complaint was that it's a bit pricy for a pizza place, but it's more of a restaurant than a typical pizza joint, so that's understandable.

Anthony's is located in Settlers Ridge in Robinson Twp, just off of the Parkway West.
Posted by Dave, The BurghFeeder at 6:34 AM 2 comments: Links to this post 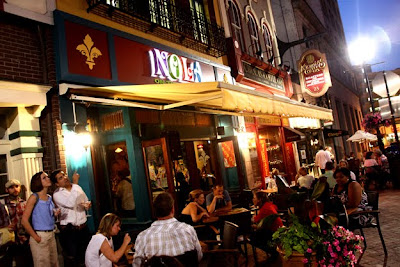 The recent renovation of Market Square has made it the location for several new restaurants within the past year. Joining long time tenants like Ruth's Chris, The Original Oyster House, and Primanti's, are at least five or six new eating establishments. In the past, The 1902 Tavern was one of my favorites, although admittedly it was desperately in need of some updating. Since the 1902 Tavern closed, it's nice to see NOLA on The Square in that space.

The folks that opened NOLA have done a great job of improving the interior while maintaining the charm of the original structure. The classic bar, beautiful tile floors and tin ceiling have thankfully been retained, but have been cleaned and repaired.

Finding good Creole or New Orleans restaurants is not easy in Pittsburgh. Since the James Street Tavern on the North Side closed many years ago I'm not aware of any really good options.

The menu at NOLA offers frog legs, crispy fried alligator, muffaletta, shrimp and grits, along with a number of Po Boys. The Chicken and Andouille Po Boy, described as "Grilled Organic Chicken, Cajun Andouille, Homemade Mozzarella, Fresh Baguette, Lettuce, Tomato, Onion, Creole Mustard" along with a side of Red Beans and rice made for a great meal. If you feel like a drink with your meal, they can make you a classic Hurricane!

NOLA is located in Market Square in downtown Pittsburgh. As always, just click on the title to see their website.
Posted by Dave, The BurghFeeder at 6:48 AM No comments: Links to this post 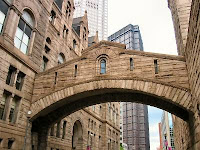 At one time this bridge was used to transport prisoners from the Allegheny County Courthouse to the Jail. The Bridge of Sighs mimics the original in Venice. It is one of many architecural highlights of the building which Henry Hobson Richardson considers his best work. The Bridge of Sighs is one of 720 bridges within Pittsburgh city limits, and one of more than 1,700 bridges criss-crossing Allegheny County. Pittsburgh has more bridges than any city in the world except for Venice, Italy.
Posted by Dave, The BurghFeeder at 7:59 AM No comments: Links to this post

For 17 years, the James Street Tavern operated on the North Side. Serving Louisiana fare and hosting the best jazz musicians in the area, it quickly became my favorite go-to spot near the city. Since the James Street closed several years ago, several different reincarnations have been tried, but none were nearly as good as the original. The James Street Gastro Pub and Speakeasy finally brings back the great menu offerings, beer selection, live music, and personal service that were the signature of this once great establishment.

On my first stop here, I learned that they had found numerous old framed photos of entertainers that have preformed there in the past. The owners intend to incorporate these into the decor. At one time, the stairway walls leading to the downstairs bar were covered with signatures and notes from many of the famous jazz artists that had played there. Past owners painted over this feature, but the new owners have started to revive the tradition.

While we did not eat full meals, the couple of appetizers that we tried were tremendous. My favorite, the "Tiny Tunas" are described on the menu as: Ahi tuna sliders, avocado, citrus scented sprouts, red onion, wasabi mayonnaise,
pickled ginger. The tuna medallions were perfectly seared on the outside, and beautifully rare on the inside. They were really a great combination of flavors Other offerings include a nice selection of sandwiches, salads and wings with not only several different sauces, but a choice of five different dry rubs.

Their web site (click on the title above) lists 15 different nights in February with live entertainment, and the Pittsburgh Jazz Society has started to hold their weekly Sunday night concerts here. For years the Jazz Society was in a great room at the Rhythm House in Bridgeville. When that closed, they moved to the Rivers Casino but the casino just wasn't a very good venue. Also, while the Jazz Society never charges a cover, the casino would strong-arm you into buying their buffet just to see the band. Now they are back to the kind of place they belong!

The James Street is at 422 Foreland Street on the North Side.
Posted by Dave, The BurghFeeder at 7:12 AM No comments: Links to this post