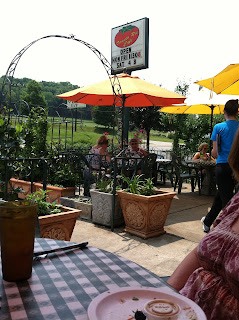 Years ago, as I would make frequent treks to North Park to enjoy the summer sunshine and maybe an afternoon of swimming or picnicking, I was always curious about the Tomato Pie Cafe, which sits right as you enter the park. Since my first visit several years ago, I've made Tomato Pie one of my favorite summer lunch spots. A small restaurant consisting of an indoor dining room, a screened in porch, and a beautiful outdoor patio, Tomato Pie is a perfect location to enjoy a meal on a sunny day. The owner maintains a beautiful garden behind the restaurant, growing fresh herbs and vegetables to use in his recipes, and the patio is decorated with beautiful flowers and also pots of rosemary and fresh basil. 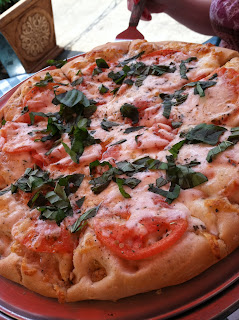 While I usually enjoy a pizza, the limited menu includes some very tasty dishes, with my favorite being penne pasta in pink leek sauce. Today though, we enjoyed a pizza and a pair of house salads. Standard pizzas are served, along with the signature Tomato Pie, and the DiPositano. The DiPositano is a wheat crust with sliced tomato, spinach and feta. We went for the Tomato Pie which has ripe tomato slices instead of sauce and fresh coarsely chopped basil topped with mozzarella on a crisp crust. Over the years, I've heard stories of poor service but I've never experienced that here. This is a very small space that can get very crowded on nice days. I'm sure those reasons could be contributing factors on occasion. I don't go to Tomato Pie when I'm in a hurry anyway! I go to enjoy the food and the outdoor patio, and the experience has always been enjoyable. If you go, keep in mind that they don't accept credit cards (although there is an ATM on premise), and due to their limited seating, I would recommend avoiding peak times. Tomatoe Pie is located on Ingomar Road just at the entrance of North Park.
Posted by Dave, The BurghFeeder at 8:32 AM No comments: Links to this post 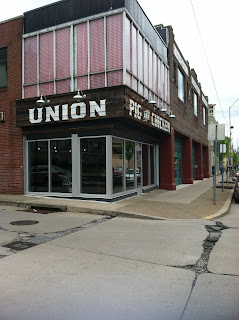 Kevin Sousa is well known by foodies in the Pittsburgh area.  His background includes work at the Duquesne Club, Soba, Bigelow Grille and Alchemy.  I met him during his short stint revamping the menu at Yo Rita on the South Side.  Since then, he has focused on the creation of his own restaurant, Salt of the Earth.  After a year of great success with Salt, he has now opened Station Street Hot Dogs and Union Pig and Chicken in East Liberty.

Union Pig and Chicken is strictly BBQ, as the name implies.  This is not a formal restaurant like Salt, although they do share the concept of comfortable communal tables, and a fairly limited menu but that's OK in a BBQ joint.  The menu offerings include ribs, brisket, BBQ and fried chicken and pork.  For lunch I ordered fried chicken with a side of potato salad.  I rarely order fried chicken, but I've heard great things about it, and I wasn't disappointed.  The chicken had perfect crispy outer crunch, and the meat was tasty and juicy. 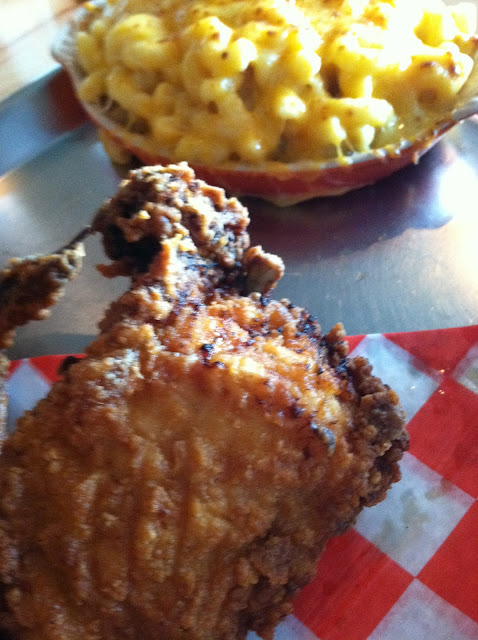 It was probably the best fried chicken I've ever had!   Stacy went for the pork BBQ sandwich with a side of mac and cheese. The sandwich and all the other meats here are served "dry".  Three BBQ sauces, a habanaro, sweet BBQ, and a Carolina vinegar sauce are on the table and are all exceptional. I expected a standard pulled pork, but as usual, Sousa surprised me.  The pork was flavorable chunks, so tender and flavorful that no sauce was needed.  You're gonna think that I work for Sousa (which I don't!) but the pork might have been the best pork sandwich I've ever had too!

Union Pig understands that the key to great 'Q is the quality and preparation of the meat, not the sauce.  They don't allow any substitutions to the menu offerings, which I know some people don't like, but I can live with that.  The only complaint we had has nothing to do with the food...It was freezing in there!  Couldn't have been over 60 degrees, but I'm sure that was just on this occasion.

Union Pig and Chicken is located at 220 N. Highland Ave, in the East Liberty area of Pittsburgh

﻿
Posted by Dave, The BurghFeeder at 9:25 PM No comments: Links to this post