BBQ is one of those foods that can be divisive among passionate fans.  I would guess that that's because it's prepared so differently in different regions, not only within the U.S. but the whole world.  I can hardly keep up with this country's variations on 'Q, so that's my only reference point.

Of course the southeastern part of the U.S. is the epicenter of BBQ for most of us with several styles ranging from the Carolina's with their vinegar based sauces, to Memphis where ribs are usually served either "wet" or "dry" and Cole slaw is typically served on sandwiches.  Texas BBQ is predominately beef while Kansas City leans toward the sweet sauce that we see dominating the sauce selections at local supermarkets.

Most BBQ places in this area serve a combination of the above.  I prefer to get my meat dry and add sauce as I see fit and at Pork 'n Nat that's how most of it is served.  We stopped in for lunch on a recent Sunday afternoon and while the atmosphere is lacking (after all, it is a BBQ joint!), we were quite pleased with the food.

The menu has four platters with chicken, pork, brisket or ribs that come with two sides and jalapeno cornbread.  They also have a number of starters, sandwiches and a kids menu.  Since it was lunch, we both decided on sandwiches.  Stacy ordered the Brisket Reuben which is described as "thin sliced brisket on marble rye with homemade sauerkraut, cheddar cheese and horseradish".  I went for the pulled pork.  Four different sauces are available, three are tomato based (sweet, hot, smokey) and the other was a Carolina style...Vinegar based with mustard and a touch of tomato.  I went for the Carolina on my pulled pork, not so much because because I don't like the others, but more because this type of sauce is harder to find around here.  The pork was tender but was clearly smoked, not baked and the sauce was a perfect compliment to the smokey meat.  Stacy (who used all the sauces!) could not stop raving about the Brisket Reuben.  I've always felt that if a BBQ place can make good brisket, the chances are good that everything else on the menu will be good also, so that's a good sign. 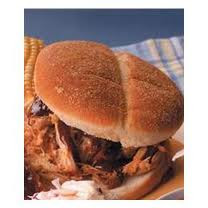 Pork 'n Nat is at 8032 Rowan Road in Cranberry.  Check out their website here: http://www.porknnatbbq.com/default.html
to see the menu or check hours.

Posted by Dave, The BurghFeeder at 10:49 AM No comments: Links to this post

I'm always on a quest for great pizza, and one that I've always is the Chicago style at Domenico's in Cranberry.  I usually can't stand Chicago style because I find that it's usually way too "doughy" for my tastes.  The pie at Domenico's isn't so typical.  The crust, while thick, is still crispy.  They use a sauce made with great tasting chunky tomato's and the cheese, while generous doesn't overwhelm the pie.  In my experience this pie takes a little longer than their standard pizzas, but it's worth the wait! 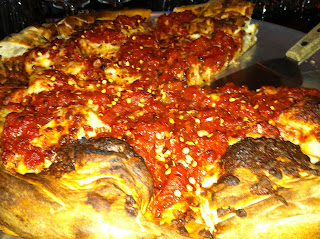 In addition to pizza, they offer a full menu with everything from salads to chicken, veal and seafood.  While the interior is a little dated, the place is comfortable and if you are interested they have a nice bar, with a few booths and tables.  Domenico's is on Route 19 in Cranberry, (just North of Walmart).

http://www.domenicoscranberry.com/
Posted by Dave, The BurghFeeder at 1:49 PM No comments: Links to this post