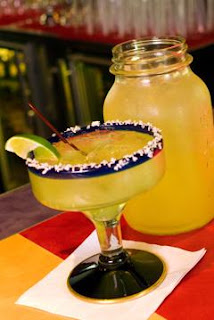 I stopped at the Franklin Inn today for lunch, and it hit me that while I've been there many, many times, I've never written about it.  For several years I actually lived in the neighborhood and it became a regular stop.  Since then, I've still managed to stop in fairly frequently.  I vividly recall my first visit which happened to be the only time I've been there and was disappointed...Not because of poor service or food, but because of my own perceptions.  It was probably 20 years ago...I was in the mood to try a new restaurant and I wanted a steak!  I recalled driving by and seeing the sign with a picture of Ben Franklin.  Any place named "The Franklin Inn" with a picture of Ben on their sign must have a great steak...Wrong!!!

The Franklin Inn is a Mexican restaurant, and no, I don't know the relationship between the name and the menu.  A funny note, a friend of mine who can't seem to remember the name started referring to it as Mexican Fiesta, and at least with us, that name has stuck over the years.  This has been a favorite stop for lunch over the years, but the bar, while small, is fun and the locals are always eager to talk to you.

The menu contains everything from soup (the black bean is tremendous!), to sandwiches, to several house specialities, such as a chorizo burrito which is described as: A large soft flour tortilla filled with chorizo, cheese, tomatoes, and onions. 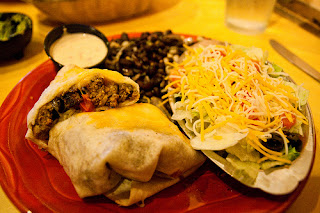 Chips and salsa are brought to your table.  The fresh salsa is very tasty, but if you ask, they will give you a hot version that's really tasty.

The Franklin Inn is on Rochester road in Franklin Park, just North of Pittsburgh. 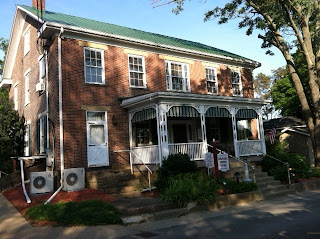 I've heard about Drover's Inn for years now.  It's a very unique old inn and restaurant but the reason it intrigued me was their reputation for wings.  I've had wings in a million places including a couple of stops at the birthplace of Buffalo Wings, the Anchor Inn up in Buffalo (yuk, not my favorite).  The reason I haven't make it to Drover's is that it's a bit out of the way, located in the northern panhandle of West Virginia in Wellsburg.  I happened to be staying close to there in Steubenville last week and decided now's my chance!

Drover's doesn't open until 5:00, and that's when I arrived.  I'm glad that I got their early, because the cars started piling in as soon as the doors opened.  The Inn serves dinners in dining rooms on the first floor and their is a tavern in the basement.  The entrance to the tavern is through an old style basement door, the kind that lift up walk down a few steps and then enter the basement.  I had read that the basement is the place to go, so that's where I was headed.  It's unique, kind of like eating in a hundred year old basement...But the crowd was fun and the bartenders were great.

My thing with wings is simple.  I like them crispy.  Sauces are important, but secondary...No sauce can make up for mushy wings.  They offer six levels of heat from Mild to Hurt-Me, and you can also choose from Honey BBQ, Sweet and Hot Oriental, or Buffalo Garlic.  They will also add Cajun seasoning to any selection.  Orders are small which is one pound and is 7 to 9 wings.  A large order is two pounds.  I decided to go for an order of the Buffalo Garlic.  They came out with just the right amount of sauce but more importantly, crispy!  The sauce was spicy with a hint of garlic and the wings were cooked to a crisp which held up well under the sauce.


Check out this view of the basement Tavern: 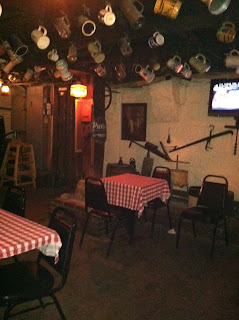 Drover's Inn is on Washington Pike in Wellsburg WV.  It's a bit out in the woods, so if you go, a GPS or at least good directions are important.
Posted by Dave, The BurghFeeder at 3:20 PM 1 comment: Links to this post